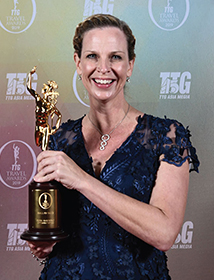 What is the most impressive achievement for your company this year?

This year is Royal Caribbean International’s Double Quantum Year, first marked by the arrival of the new Spectrum of the Seas in Asia in May. This ship has not only taken over the title of Asia’s largest and most revolutionary ship, she has also wowed guests with her first-at-sea attractions such as SkyPad, the VR bungee trampoline experience, AR games and the two-deck Ultimate Family Suite which comes with an indoor slide. This is coupled with the new six-month season of sister ship Quantum of the Seas in South-east Asia, the longest ever for a Quantum Class ship here.

It is often said that an organisation is only as strong as its people. What investments have your company made in talent development this year?

Over the past year, Royal Caribbean’s efforts were focused on elevating the way we prepare our workforce for life at sea.

Approximately 80 per cent of shipboard roles over the next three years will have access to more mobile-enabled micro-learning modules, which increases job skills proficiency and improves on the speed our crew learn. A full suite of over 1,000 learning modules will be made available to all crew.

As for our shoreside employees, we have started offering them access to LinkedIn Learning for personal development.

What can your trade partners and customers look forward to in doing business with you in 2020?

In addition to Quantum of the Seas in South-east Asia, 2020 offers more amplified experiences in Asia and beyond for Royal Caribbean’s guests, with the revamped Voyager of the Seas and Allure of the Seas.

Voyager of the Seas will be back in Singapore for 13 more sailings next May and June along with her newly added thrills, the Perfect Storm waterslides duo, ‘Battle for Planet Z’ Laser Tag game and more. Allure of the Seas, one of the world’s largest, will kick-start her Mediterranean summer season with new features like the Ultimate Abyss world’s tallest slide and Music Hall.